The Murder of Girly Chew Hossencoft 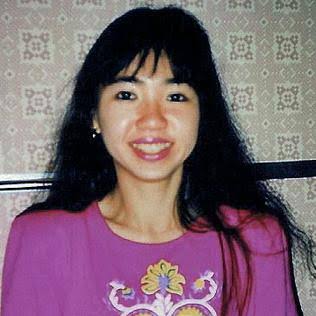 Girly Chew Hossencofft (36, Pictured) disappears; those accused of her murder will later reference aliens, UFOs, and the New World Order.

Chew had married Diazien Hossencofft, a self-described scientist, in 1992. By 1998, Chew charged Hossencoft with domestic assault after he choked her and threatened to kill her. Chew told authorities the attack was a result of Chew contacting Hossencofft’s lover who then terminated her relationship with him.

Chew moved out of her home with Hossencofft in January of 1999 and filed for divorce soon thereafter. She told a coworker Hossencofft repeatedly threatened to kill her and told the coworker, as well as an FBI agent she had been in communication with, that if anything should happen to her they should investigate her husband. Chew also began taking martial arts classes for self defense.

In the summer of 1999, Hossencofft met Linda Henning, whom he told he was a doctor and a former member of the CIA. He also claimed to be an alien and immortal. Henning soon broke off her engagement to another man to pursue a relationship with Hossencofft.

Chew was last seen leaving her workplace on September 9, 1999. Hours later, neighbors saw Hossencofft hurriedly pulling into his driveway. It was noted his face and neck were covered in dark paint, and he wore a camouflage shirt.

When Chew failed to come in for her shift at work on September 10, her disappearance was reported to authorities. Her apartment was searched which showed signs of a struggle, as well as blood which had been cleaned with bleach. The blood was later tested and was shown to have come from three sources: Chew, Henning, and a third unidentified person. Clothing and other items belonging to Chew — including clothing, a washcloth, gauze, and duct tape — were soon found on the side of Highway 60. The items had been wrapped in a tarp and had traces of blood as well as hair belonging to both Chew and Henning. A cadaver dog and helicopters were used to search the area including nearby mine shafts in an effort to locate Chew’s body, but were ultimately unsuccessful.

Henning’s home was searched and investigators found a 33-inch (84-cm) “ninja sword” in the ceiling of her garage. The sword was later linked to Hossencofft who had purchased it on the day of his wife’s disappearance. Henning was charged with making a false statement in October of 1999, after it was found she had lied about having never met Chew, and Hossencofft apprehended after he was tracked to South Carolina. Both were indicted in Chew’s murder in November 1999.

Hossencofft pleaded no contest to murder, kidnapping, and other miscellaneous charges to avoid the death penalty, and received a sentence of life imprisonment. Part of the conditions of his plea, however, involved Hossencofft revealing the location of Chew’s body, a condition he did not uphold. While he claimed to have been the “mastermind” behind the crime, Hossencofft claims he does not know the location of Chew’s corpse.

Henning pleaded not guilty in court. Hossencofft spoke at Henning’s trial, testifying he was a reptilian shape-shifter capable of being in multiple places at the same time. He also implied Chew’s body had been cannibalized and claimed a third defendant in the trial, Bill Miller, was allowed to kill Chew for “practice” before the upcoming alien New World Order. (Miller pleaded no contest to tampering with evidence and spent five years in prison.) To explain Henning’s blood at Chew’s apartment, Hossencofft claimed he often asked people for blood samples to “test” after informing the supposed subjects he was a scientist. Hossencofft testified he planned to use one such sample he had obtained by planting the blood in an effort to confuse investigators. He claimed the vial broke before he was able to leave the blood at the scene and instead used Henning’s blood which he diluted with bleach. The prosecution contended Henning’s blood was left at the scene during a struggle with Chew, and was contaminated with bleach after Chew’s murder in a bid to destroy evidence.

Henning was convicted of murder, kidnapping, conspiracy, perjury, and evidence tampering. She was sentenced to life plus 43 years in prison. “There must be something that they’re afraid that I’m going to say because they’ve made every effort possible to silence me,” Henning told reporters soon after her sentencing, alluding to a global alien conspiracy. “Well of course I know what they don’t want me to say. I’m not going to say. I’m still alive, so it’s probably because I’ve kept my mouth shut.”

In January of 2020, Hossencofft petitioned the court to vacate his sentence, alleging the police and prosecution colluded to hide evidence which would exonerate Hossencofft and Henning. His lawyer asked for a 6 month extension to prepare, which the judge asked if that amount of time was necessary. “I do, your honor,” Hossencofft’s attorney replied. “I don’t want to give away too many details, but this case involves global connections.”

As of September 2020, Chew’s body has not been recovered but is suspected to be in Socorro County, possibly along Highway 60 near Datil, New Mexico about 95 miles (153 km) southwest of Albuquerque. Any information pertaining to the case should be directed to the Albuquerque Police Department at 505-761-8800.