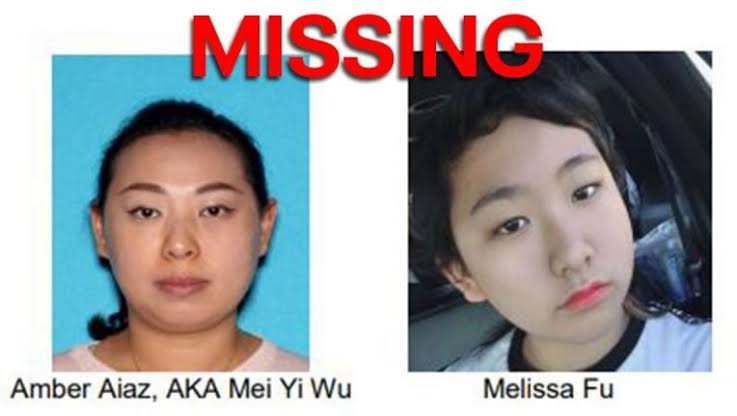 Aiaz was last seen in Irvine, California on November 22, 2019. She vanished with her twelve-year-old daughter, Melissa Fu. On the day of the pair's disappearances, Cheng Zhang, who is Aiaz's husband and Melissa's stepfather, was home with Melissa at their apartment in the vicinity of Michelson and University. Aiaz was driving home from Las Vegas, Nevada with a carload of production they planned to sell at the market.

Someone knocked on the door at 4:30 p.m., and when Zhang answered, he saw a woman and man he did not know them. The woman had something in her right hand. Zhang felt something wet and misty on his face, then collapsed, unconscious. When he woke up hours later, there were bloodstains on the carpet and a bloody handprint on the kitchen wall. Melissa was gone. Aiaz should have come home by this time, but she was gone too. Neither of them has ever been seen again. 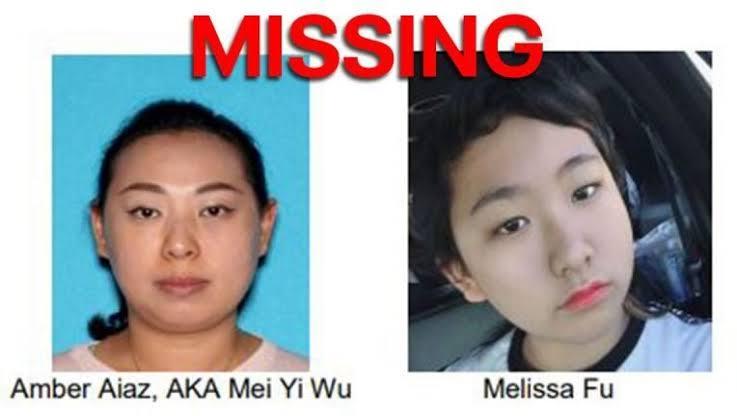 Zhang found a white-lined paper with handwritten instructions from the abductors in Chinese. The note said Aiaz and Melissa were okay and would be home in a few days, but only if Zhang didn't contact police; if he did, the note warned, he would never see his wife and stepdaughter again. The note advised him to clean up the apartment and act normal until they returned.

After the kidnappings, Zhang followed the kidnappers' instructions and carried on as normal for a week. He cut away the bloody carpet and replaced it, painted over the bloody handprint on the wall, posed as his wife on WeChat, and told his stepdaughter's school she was homesick. He found his wife's Ford Explorer parked in its usual spot, still full of the produce, and sold the food.

He told that during this period he would sometimes find notes slipped under his door, telling him he was doing fine, would see Aiaz and Melissa soon, and to keep acting normally. Five days after the kidnapping, he got the fifth note, telling him his wife and stepdaughter were still fine but he should leave town for two days. He went to Las Vegas, lived with a relative, and returned two days later to find a sixth, final note telling him again that everything was fine, advising him to clean the house again, and saying he would see Aiaz and Melissa in a few days.

When those few days passed without any more notes and his wife and stepdaughter reappearing, Zhang finally went to the police. This was on December 2. Police were initially very skeptical of his account of the abduction and the events that were pursued. However, an extensive inquiry, including more than 40 hours of interviews with Zhang, and 44 days of round-the-clock surveillance of him, did not disprove his story and in fact, tended to support it.

Zhang did not behave skeptically during the time he was under surveillance, and he directed police to where they found to find the physical evidence he'd tried to cover up or destroy. He had thrown out the bloodstained carpet, but forensic techs found blood on the padding underneath, blood which they believe was Aiaz's. When detectives looked into sprays that could instantly knock someone out, they found out an anesthetic drug called Fluothane matched that description.

Before her missing, Melissa had talked to her grandmother daily. They have not spoken since the date of the child and her mother's alleged kidnapping. Aiaz left her American and Chinese bank accounts untouched, both her and Melissa's passports were left behind in the apartment, and neither of them is known to have entered China since their disappearances. 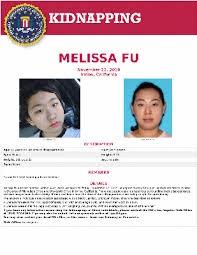 Detectives think the motive for Aiaz and Melissa's kidnappings may have something to do with Aiaz's past. She had told Zhang she was a wealthy woman with millions of dollars in investments and hundreds of thousands in cash, and he was surprised to find out after her kidnapping that this was untrue. It's possible she had upset someone by deceiving them about her money, or that the kidnappers kidnaped her and her daughter expecting her to pay them the money she did not possess.

Authorities are interrogating the cases as possible abductions. They remain unsolved.