The Sad Tale of the 'Flying Tailor 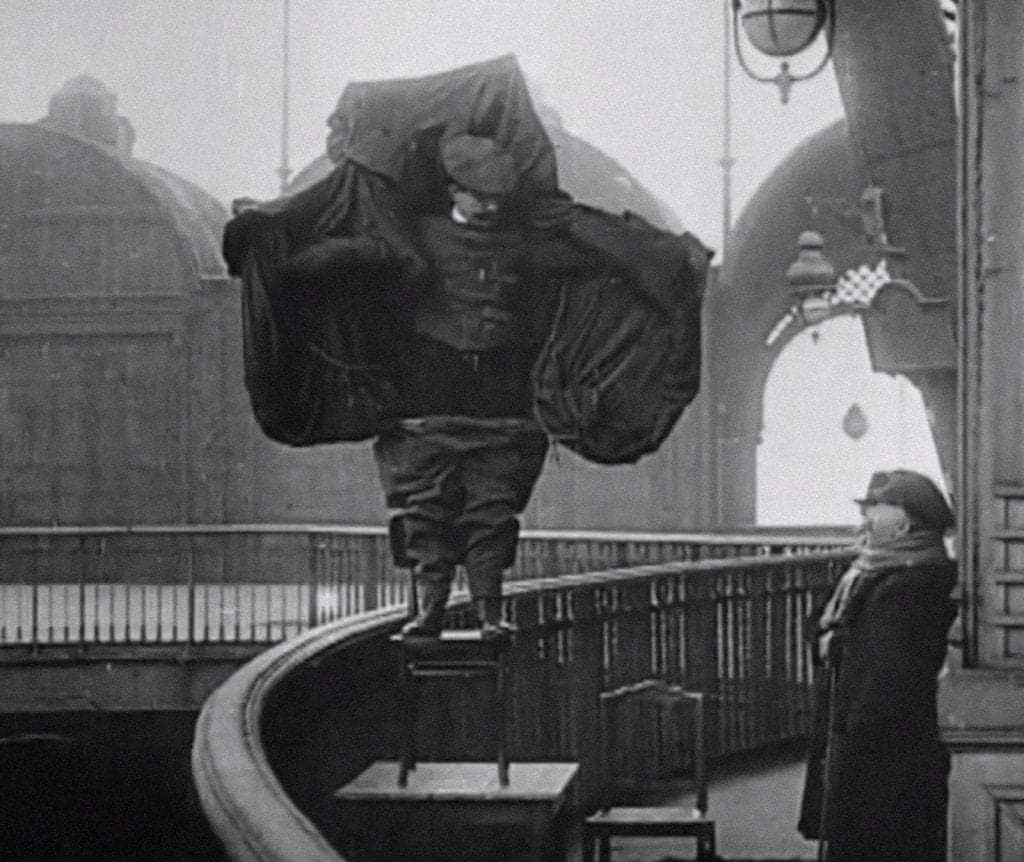 Franz Reichelt, an Austrian-born French tailor who is remembered for jumping to his death from the Eiffel Tower while testing a wearable parachute of his design. Like all parachutes, Reichelt’s idea relied on increasing the surface area of a falling person in an attempt to slow their descent, but instead of being attached to an overhead canopy, his parachute would be integrated into the flight suit itself. Reichelt’s suit had several extra panels and flaps that would deploy as a person was in freefall. Or at least that was the idea. 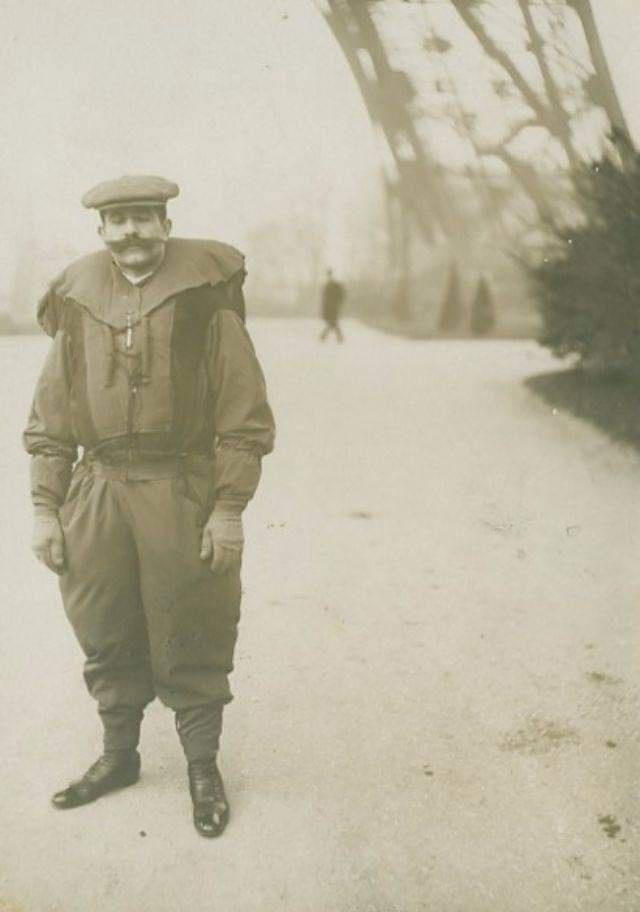 In 1912, he arranged to stage a highly publicized demonstration of his suit in which he would jump off the first deck of the Eiffel Tower, over 180 feet up.

On the morning of February 4, 1912, Franz Reichelt, was confronted at the base of the Eiffel Tower by a guard who went by the name of Gassion. For a few tense moments, the two men argued, Gassion refusing to let the man wearing the odd puffy suit past. 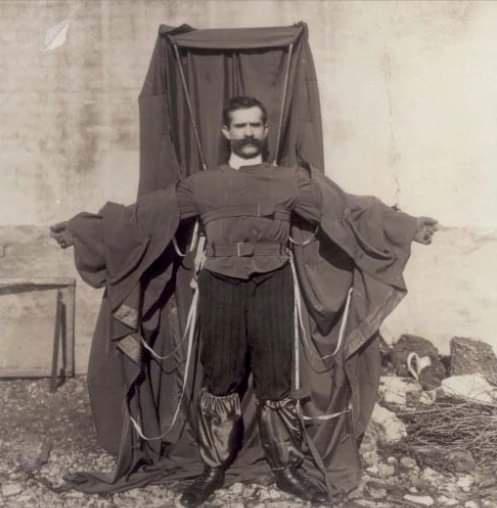 You see, Franz was also an inventor and a few weeks earlier he had received permission from the French authorities to test his new wearable parachute/wingsuit by tossing dummies off the lower level of the most well-known tourist attraction in Paris.

The guard finally relented and a shaken and flustered Franz made his way up to the tower's first platform, about 187 feet high, his assistants trying to dissuade him the entire way up.

It is stated that none of the tailor's previous tests had been successful.

When he had approached the French Aeronautics Club with his design - an X-wing, retractable chute using 130 feet of cloth, they told him the canopy was too weak to deploy. A year earlier, he had attempted a jump from 26 feet that resulted in a broken leg. But he persisted.

The media and a small crowd had gathered below the Eiffel Tower. Franz stepped up on a stool to reach the rail, looked out toward the Seine and with a smile on his face, stretched out his arms to deploy his chute, and jumped, falling immediately to his death.

The police had permitted him to perform the stunt on the basis that he would be conducting dummy drops. Under no circumstances would they have allowed him to proceed if they had known he would be making the jump himself. They never signed an order that allowed a live jump.

So what went wrong?

Quite simply, the parachute or wingsuit didn’t open. The footage below shows the man jumping from the first level of the tower and not appearing to slow down at all before hitting the ground.

The problem, it appears, is that the suit was still at the testing phase but the jumper was convinced it would work - hence jumping himself rather than using a dummy.

Was there a working parachute?

If you’ve seen the footage above, you’ll notice that there’s no hint of a parachute opening at all. 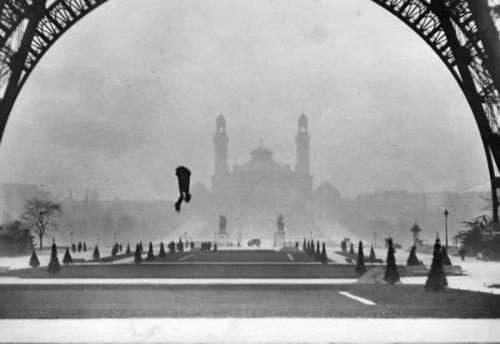 But there was one there, a particularly large one according to the French press from the time, who had gathered to see the spectacle.

Reports said that the parachute was 9kg in weight, and up to 32 meters squared in fabric. All Reichelt had to do, reportedly, was open his arms and legs to make a big cross shape and the chute should have opened.

He intended that if it worked his contraption, which was described as a bat suit, could be worn by airline pilots and used if their plane got into trouble. 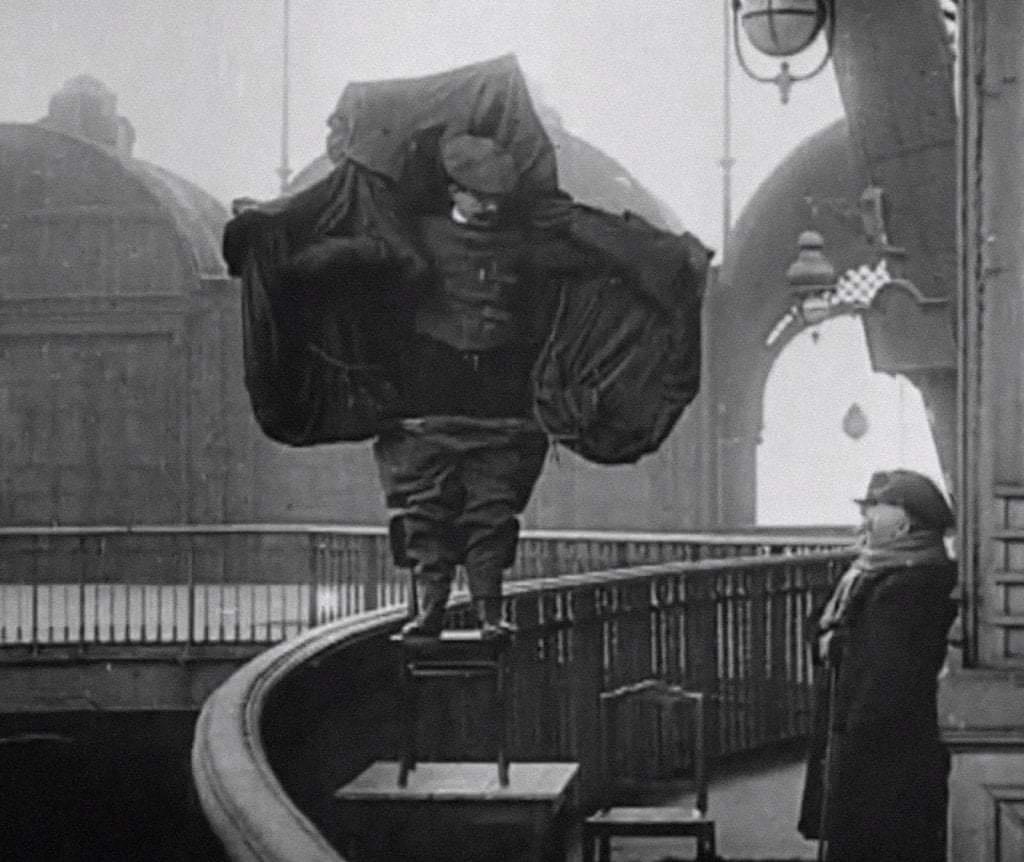 WAs the jumper mentally stable?

Apparently yes, and he was reportedly very determined to make the jump, even though just about everybody at the scene was trying to convince him otherwise.

Police officers, who had only permitted him to use a dummy in the jump, tried to stop him and his close friends tried to talk him out of it until the final moment.

He can be seen hesitating on the ledge and moving to jump on several occasions before leaning back. He finally decided to go for it.

But why didn’t he use a dummy?

There are whispers that he needed a publicity stunt to get sponsorship - and he had no time for dummies because his patent was soon to expire.

After his body was removed by the crowd, a few bystanders pulled out a measuring tape and walked over to where Franz had landed. They determined that Franz had left a half a foot indent in the ground.

From his arrival at the tower, however, Reichelt made it clear that he intended to jump himself and he did. Perhaps he got what he deserved.