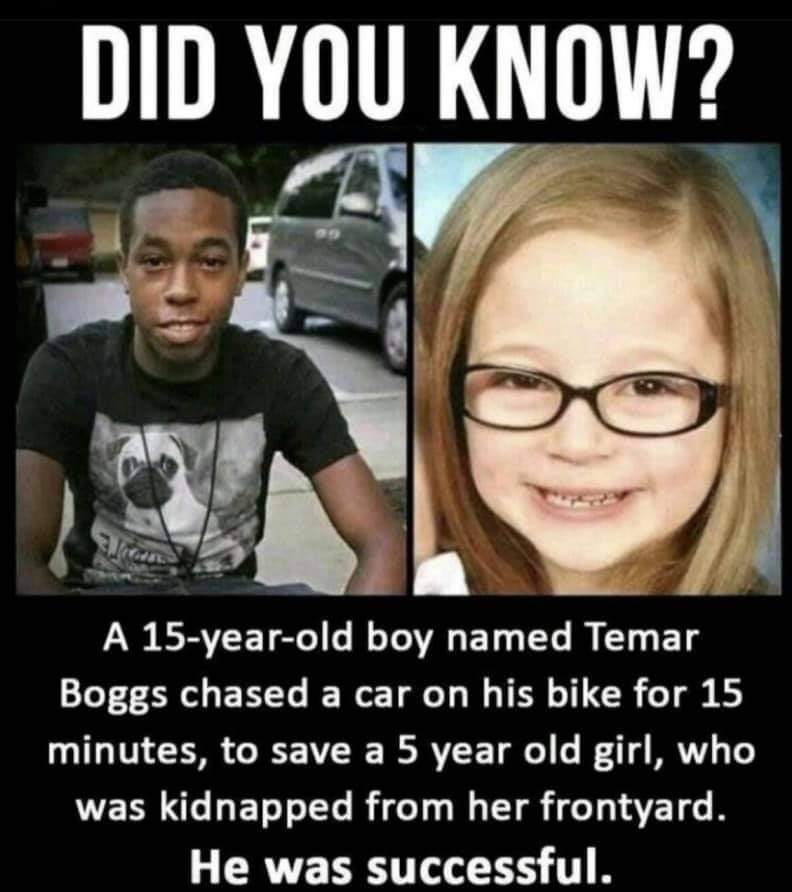 Temar Boggs is a 15-year-old student who lives in Lancaster, Pa. He loves playing sports, hanging out with friends, skateboarding, and biking. Add "being a hero" to the list.

Temar was having an average summer day on July 11: he helped a neighbor move her couch, and then settled in to hang out with some friends. But when Temar and friend Chris Garcia heard a five-year-old girl had been kidnaped from their neighborhood, they jumped into action. After locating and chasing down the abductor, they rescued five-year-old Jocelyn Rojas and were able to return her safe and sound to her parents.

For his heroics, Boggs is our Foot Soldier of the week. I spoke with him this week about his extraordinary actions.

How did this all happen?

[After finding out about the abduction], we went out there and made a little search party of all of our friends and went to go look for her, go find her.

We looked for about half an hour to about 45 minutes around the area where they said she could have been missing and we couldn’t find her at all so we came back. The whole block was filled with firefighters, police, newscasts, and so on so forth.

So people were-- everybody in the group was scattered out everywhere. People were in their houses. One of my friends was at their houses; most of my friends were talking to other people and all this other stuff. And I was just up a long thing on the bike and I had a feeling in my stomach that I was going to find the little girl.

And I went toward that way and Chris followed me, and from there, then-- and we saw a suspicious car, we looked in the passenger seat: the little girl was in the car. We chased it for about ten to fifteen minutes and I guess he got scared and let her out in the corner.

I picked her up—well, no, I didn’t pick her up, she ran to me and said she needed her mommy, and I rode her back home. Well, halfway, cause the way I had her was dangerous so then I carried her back halfway home.

So what about the car was suspicious, what made it catch your eye?

So, like, up the hill where I was chasing him down… there was like a car of cops, and he saw them and turned back around and went down the hill. And that just made it a little more suspicious. And then I looked in the passenger seat - the little girl was there.

And when you saw her - were you scared? Did you know it was her? What was going through your mind?

I wasn’t scared, I was just [thinking], "Save the little girl, make sure she was okay."

So you got here, you took her back, you gave her to the police first? Or did you take her straight to the family?

I took her to… I think it was a firefighter.

And you got to meet her family later. What was that like?

It was just heartwarming, how much love they showed me.

How do you feel about having saved that girl?

It was just out of the heart. It wasn’t to get attention or anything. It was just to help somebody in the community, help make sure another little life was okay and make sure her future could be possible.

And your friend Chris, how does he feel about it?

He feels the same way. He did that out of heart, he didn’t do it to receive anything.